I have been astonished this week at the number of drivers in and around the York Area that are texting or updating their facebook or twitter whilst driving.

A new report has been published this month by the Institute of Advanced Motorists, which underlines the increasing role of smartphone use in car accidents. The statistics make for shocking reading.

It is estimated that using smartphones whilst driving is actually more dangerous than the driver drinking or having smoked cannabis before driving.

The IAM report has led to a call for smartphone usage to become as socially unacceptable as drink driving, and failure to use a safety belt. Both of these issues have been pushed up the political agenda by sustained information campaigns, and the IAM hope the same level of social censure can be achieved by highlighting the dangers of smartphone use whilst driving. 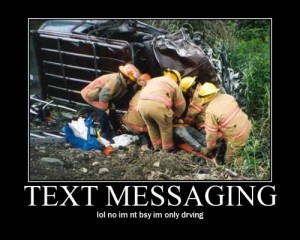 Recent RAC Foundation research showed reaction times slowed by 35% when 17 to 24-year-olds drove while reading and writing text messages.
And its research last year showed that texting while driving impairs motorists more than being under the influence of drink or drugs.
It said nearly 50% of drivers aged between 18 and 24 texted while driving.
As well as reaction times being slower, it said texters often drifted out of lanes, had poorer steering control and the overall driving performance was poor.
Drivers face a £60 fine and three penalty points on their licence for using hand-held mobile phones.

If you have just passed your first driving test, the New Drivers Act means you’re ‘on probation’ for two years. If you reach six or more penalty points in that time, you’ll lose your licence. Then, you’ll have to apply and pay for a new provisional licence. This means you’ll be a learner driver again.

But the consequences could be far worse

If you are looking for Driving Lessons in York or the local area . Contact Academy Driver Training NOW